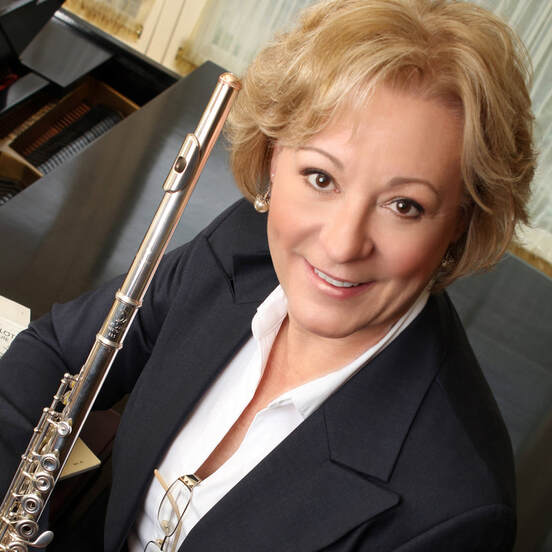 ​Our featured guest artist for 2020 is
​Mary Stolper!

Ms. Stolper is currently Principal Flute of the Grant Park Symphony Festival Orchestra, and the Music of the Baroque Orchestra.  She also acts as Principal Flute with the Chicago Philharmonic Orchestra and  The Joffrey Ballet.

For over a decade she acted as the principal sub in the flute section of the Chicago Symphony Orchestra.  During that time she was awarded two sabbatical positions and accompanied the Orchestra over 17 European/Asian/South American tours with Maestros Solti, Barenboim and Boulez.
As a chamber musician, she is invited to perform throughout the city including numerous performances on “Live from Studio One” the live broadcast series on the classical radio station WFMT.  Invited as flute soloist, she performed with the great Opera Soprano Renee Flemming at Orchestra Hall.
Ms. Stolper performed with the Chicago Sinfonietta Orchestra in Vienna, 1996, with a performance of Bernstein's Halil for solo flute and strings.  Also with the Sinfonietta, 1997, she performed the United States Midwest premier of the Concerto for Flute by Joan Tower.   While in Prague, 1998, soloing with the Czech National Symphony, (Maestro Paul Freeman), she recorded her second CD called American Flute Concertos, on the Chicago based Cedille label.  Other recordings include Voices for Flautist and Orchestra by Shulamit Ran, (Maestro Cliff Colnot), and her third Cedille release called Chicago Flute Duos.
Ms. Stolper toured former East Germany, 1989, with the Chicago Chamber Orchestra and received excellent critical reviews for her performance of the Nielsen Flute Concerto.  The Nielsen Concertowas recorded with the Chicago Chamber Orchestra on the Centar label, Maestro Dieter Kober conductor.
A current recording artist on Cedille Records, she has recorded 3 solo CD’s and performed on numerous orchestral and chamber music recordings.
Ms. Stolper's performance credits also include the following organizations: Chicago Chamber Musicians, Eighth Black Bird, Lyric Opera of Chicago, Ravinia Recital Series, University of Chicago Contemporary Chamber Players, American and Joffrey Ballet Orchestras, Contemporary Chamber Concerts at Orchestra Hall hosted by composer Shulamit Ran, Da Camera Chamber series in Houston, Texas and the Old First Church Chamber Series in San Francisco.  Her extensive skills of contemporary techniques and performing on a variety of flutes have been featured on numerous concerts with CUBE, and MusicNOW series at Symphony Center under Maestros Pierre Boulez and Clifford Colnot.
Dedicated to the performance of music composed by women, Ms. Stolper invited two Chicago Women Composers/Performers to perform with her at her Carnegie Hall recital debut.  Several compositions have been written for her to show her outstanding versatility on the piccolo, flute, alto flute and bass flute.  Ms. Stolper has been a frequent guest recitalist and lecturer on the subject of Women Composers.  She produced and recorded the flute music of Shulamit Ran, former composer in residence for the Chicago Symphony Orchestra and the Lyric Opera of Chicago for the Erato/Warner Classics label.
In the past, Ms. Stolper has been elected to several boards and in many capacities, including President for many of them.  They include, New Music Chicago, Chicago Society of Composers, American Women Composers, Musicians Club of Women and the artistic review panel of the Illinois Arts Council.  She was one of the founding members and a past president of the Chicago Flute Club and twice on the board of the National Flute Association.   She has acted as the Club Historian for the Musicians Club of Women, founded 1875, and for the Chicago Flute Club.
As part of the flute and harp duo ESPREE, she and harpist Stephen Hartman toured the United States for five years.  ESPREE was awarded the First Place prize of the National Flute Association Chamber Music Competition.
Ms. Stolper earned her Masters Degree in flute performance from Northwestern University, where she studied under Mr. Walfrid Kujala.  She has also received instruction from Geoffrey Gilbert, Jean Berkenstock, Edwin Putnik and Donald Peck.  Performance master classes with English Flutist, William Bennett, Ms. Stolper performed both in the United States and England.   Performance and ornamentation lessons with the brilliant J.S.Bach scholar and flutist, Mr. Samuel Baron, of the Bach Aria Group in New York, she is forever grateful for these lessons.  Formally on the faculty at DePaul University, Ms. Stolper was head of the Flute Department for over 25 years.
As a singer/actor/musician, Ms. Stolper appeared in the 1999 Pocket Opera Company production of Don Quixote, with the character role of Sancho Panza.  Repeated again in 2000, and along with the production of “Golk” where her role was that of the President of the United States. An active Master Class teacher, Ms. Stolper currently enjoys lecturing on the topics of practicing, performing and being a good colleague. ​​

Prema Bhat is an Indian Carnatic classical vocalist with a Master's degree in Carnatic singing and theory. Bhat was a faculty member at the music dept of Emory University ( 1998-2006), where she taught courses in Indian classical singing and theory. Later she had taught at the Music dept of Cagliari University, Italy ( 2011). Currently she teaches a mindfulness class for the medical and arts college students at USF and gives guest lectures in Indian classical music. Apart from performing and teaching, Bhat has composed music for the songs of 15 th Century composer Purandara dasa.

Sandra del Cid-Davies, is Piccoloist with The Florida Orchestra. Here is a fantastic feature on her, including a video.

Taylor Irelan is owner of The Tampa Flute Studio and has performed with the Jacksonville and Pueblo Symphony Orchestras, London Graduate Orchestra, and the Hot Springs Music Festival and London Symphony Orchestra as a fellow of their orchestral training programs. He has appeared as a soloist and chamber musician around the world including live broadcasts on NPR and BBCC Radio, and has presented masterclasses at universities across the U.S. He received his MMus in Orchestral Artistry from the Guildhall School of Music and Drama in association with the London Symphony Orchestra, and his BMus from the University of North Florida.
​
Deanna Mathews Kilbourne performs, conducts and teaches in the Tampa Bay area. She has degrees in flute performance from universities in her home state of Illinois. She runs Arts In letters, an arts-themed historical letter subscription and writes the blog, PracticingFlutist.com, focusing on effective and practical solutions to common playing problems.

Amanda Lyon is a flutist and music educator in Pinellas County School District. She has two degrees in music performance and pedagogy. She is the piccoloist of the Tampa Bay Symphony, principal flute of South Shore Symphony Orchestra, and an active member of the flute chamber group, FluteAmici. Amanda has been teaching flute for almost fifteen years. Her students have gone on to earn degrees in music as well as other disciplines like computer engineering and science. She is happy to be here to perform and serve the local flute community.

Patti Preves is a life member in the Mpls./St.Paul musicians union and continues to play professionally in MN and FL.   In FL she freelances and has played with Venice Symphony,  Anna Maria Island Orchestra, Suncoast Concert Band,  Gulfport Chamber Players and the Gulfcoast Flute Choir.

Kimberly Rini studied flute with Martha Rearick at USF from 1991-1994 and has performed with the Charlotte Symphony, Florida Orchestra, Tampa Bay Symphony, and Suncoast Symphony. She has been part of over 50 national tours with artists such as Il Divo, Celtic Woman, Natalie Merchant, Indigo Girls, Frankie Valli & The Four Seasons, Kansas, Dennis DeYoung/STYX, and The Who; and has done recording work with Michael Bolton, Mannheim Steamroller, and Martina McBride. She has been teaching flute privately since 2002. Kimberly holds a BA from the University of Notre Dame and an MA from Columbia University's Teachers College.

Dr. Mandy Swaim is currently Adjunct Professor of Flute at Hillsborough Community College and is an active flute instructor in numerous secondary schools throughout the Tampa Bay area. She also maintains an active studio of beginning to advanced students outside of her work in the school system. Additionally, Dr. Swaim is the principal flutist of the Tampa Bay Symphony, and has collaborated with numerous groups across Tampa and St. Petersburg including, the St. Petersburg Opera Company and Florida Wind Band. She holds a Doctor of Musical Arts and Master of Music Degree from the University of North Carolina Greensboro and a Bachelor of Science in Music Education from the University of South Florida.
Copyright by Francesca Arnone ©2022